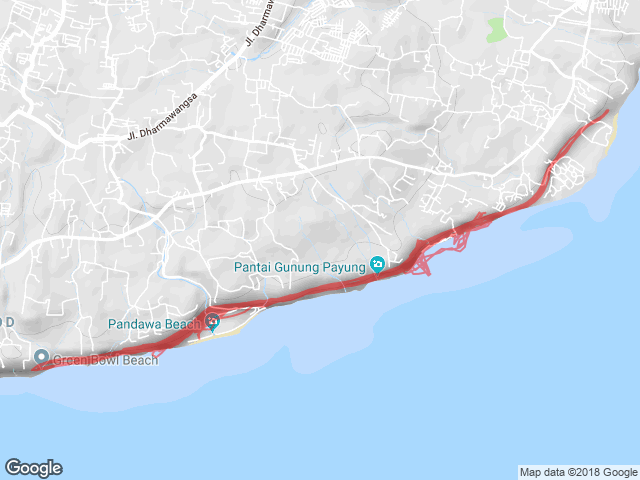 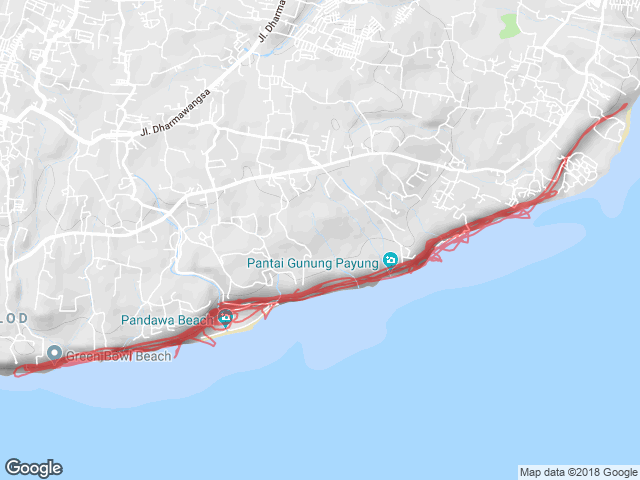 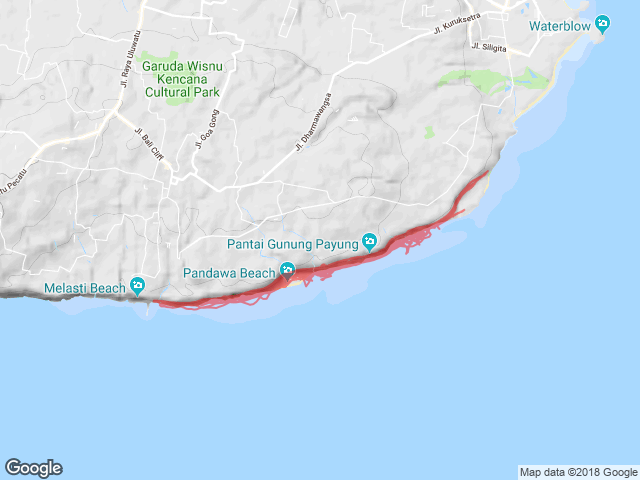 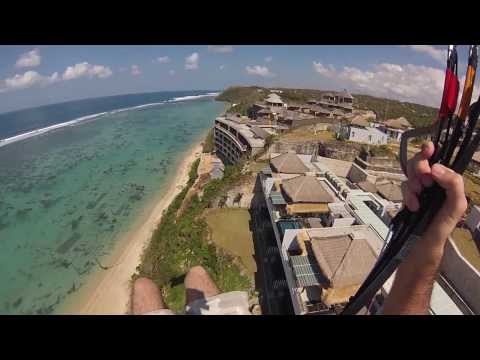 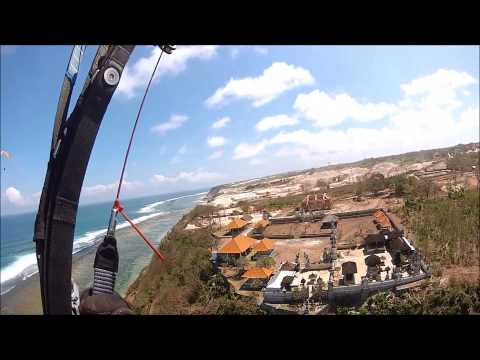 The cliff runs about 15klm long and is a great sea side ridge soaring site. Fly left down to the Niko Resort Hotel and you can even soar off the lift from the hotel above their pool to give the pool side goers a thrill. Also a good site for beginners and learners. Site fee US20 is payable and is valid for 12 months. Flying right from launch takes you down to Ungala Cliff which are spectacular. For paragliders interested in doing the run to the west end and the oversight of Uluwatu, here are accumulated tips from a variety of experienced pilots: 1. While everybody calls it flying to Uluwatu, it isn't. Uluwatu is north a kilometer or two up the west side of south Bali and there's no way to fly there and return as far as I know. Go around the corner (8:00) and you'll be in sink immediately, and with venturi effect wrapping around the corner you'll end up being unable to penetrate. One of our novice pilots made this mistake and had to bail into a tiny patch of trees at the base of a cliff. He's lucky to be alive because there was literally no where else to land. He walked away from it too. Horsehoes, and we are grateful. At least one paraglider rounded the corner and drowned as a result. For a really abject lesson in how dangerous rounding the corner is, watch this video from someone who went 30 seconds past the corner and barely made it back. https://vimeo.com/75139634 2. The Shark's Fin (1:30-3:00) is an amazing wedge of rock sticking out of the cliff that people have died flying around. It can generate rotors on either side depending on wind direction. Get lots and lots and lots of height, or be very sure of your ability to go out to sea around it and get back to lift on the cliffs. Deaths have occurred. 3. The wind should be very south for this if you haven't done it before. 4. If you haven't done it before, go with an experienced pilot who has. 5. The tides mean that good potential landing spots can disappear relatively quickly. Make sure that the tide isn't coming in when you start your run. Keep a close eye on beach bail outs as there are spots such as the Shark's Fin where they are a ways away, so height is useful. People have been caught when the wind has dropped and beaches are covered; deaths have occurred. 6. Have a speed bar hooked up and know how to use it and when. 7. Obvious stuff: - get a safety briefing at the site, preferably from Ketut Manda the instructor who operates there (see him on FaceBook to let him know you are coming, talk rates, etc). - Make sure your radios are on the same frequency as everyone you are flying with. (Another novice was on the instruction frequency, not the group frequency, and couldn't be coached by the senior pilot in the group.) - There are lots of fields along the top that look like potential bailouts, but especially past Shark's Fin the cliffs are more sheer and often have bushes along the lip. The potential for rotors is high. It's an amazing flight, but has significant dangers. Be prepared.

When the wind is SSE to SE check your return flight penetration a number of times if heading to the Ungala Cliffs at the west end of Bali as the penetration coming back may be difficult and there are not many landing opportunities below the cliffs at that end. If its SE, be careful for rotor coming of the ridge points jutting out at Ungals end when heading back. There have been fatalities in these spots. When the wind strengths over 25kph there will be rotor at about 50 meters back from the launch area ridge so stay forward from this area when top landing in these condition. It's best to beach land if unsure. There have been accidents from this as well.

As pessoas a seguir estão monitorando as atualizações desta rampa